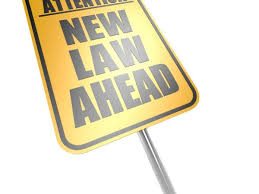 Many new CT laws and provisions of existing laws will become effective January 1, 2017. You can find the entire list of new laws and provisions at https://www.cga.ct.gov/asp/aearchives/20170101ActsEffective.asp . Included in this list are pertinent changes such as:

Per Public Act Number 14-1, Connecticut’s minimum wage will be $10.10 effective January 1, 2017. This is the highest minimum wage level that the state has ever set. Many states are following a “fight for $15 movement” in which laborers are pushing for a minimum wage of $15 an hour. Connecticut may eventually see a minimum wage of $15 in future years, although there are a few states such as California and Massachusetts who may achieve this goal sooner. Public Act Number 16-39 will allow APRN’s (Advanced Practice Registered Nurses) to sign off on medical marijuana use, an action previously only physicians could do. Public Act Number 16-83 will prevent employers from asking prospective employees about past criminal charges and convictions in their applications, unless they are applying for a job in which the federal law requires the employer to ask these questions. Violations could cause a penalty of $300.

Hang out with Attorney Max L Rosenberg, Osi Rosenberg, and the Stratford Rotary as he calls out numbers at the Stratford Rotary Annual Virtual BINGO! Anyone anywhere can play and have chances to win $$ prizes in each game and 50/50 Raffle. EASY TO SIGN UP!EASY TO PLAY! The Stratford Rotary Bingo is live and for $25, purchase 4 Bingo Cards. Friday, February 3rd. Our goal is 40 virtual players. The funds raised will help us keep our commitment to educational projects, Lords Kitchen, food pantry, etc. Please ask everyone to join an easy, fun night. We are thrilled to have Probate Judge Max L. Rosenberg entertain us. ... See MoreSee Less